skip to main | skip to sidebar

I'm going start this by reminding you of the times you've pulled into a crowded parking lot and wished with all your might that you were handicap (or at least had a handicap relative or friend willing to lend you their car pass). I think we can all agree that priority parking spaces for handicap are a noble consideration in a society lacking regard in most matters involving fairness. But I'm already on a tangent. What I'd like to focus on is a sign I saw in the parking lot of a newly built shopping outlet on Long Island: 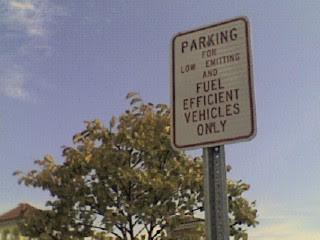 I smiled at first because at first glance it seems like a noble effort but as I crouched on my front tire snapping this photo on my p.o.s cell phone a second and third thought crossed my mind. When I first saw another alternative parking sign "For Pregnant Women and Women with Small Children" I was baffled and angry. Whoever thought of placing this sign in this parking lot had themselves or their wife in mind because I don't believe for one second that out of no where whilst paving a new lot someone thought "Hey! What can we do for all the pregnant women out there?" It's a kind gesture but I find it dubious. As I find this "green" sign to be as well. There are many people out their who neglect buying an energy efficient car albeit the environment and the money they would save. These same people would then, upon learning it could help them get closer parking (meaning less walking because they're probably lazy as shit), reconsider for their own personal benefit. But why on earth should we reward them?! It's not a sales tactic, because I doubt that much thought went into it, and there's no punishment for disobeying the sign so what's being accomplished? Snobbish berating through tin signage. At least there are men at home sleeping better because by establishing this new parking system they are "helping to make a difference".
Posted by Emily at 11:18 AM No comments: